As a side note, my husband took this picture today while we were waiting in line to pick the kids up from school. 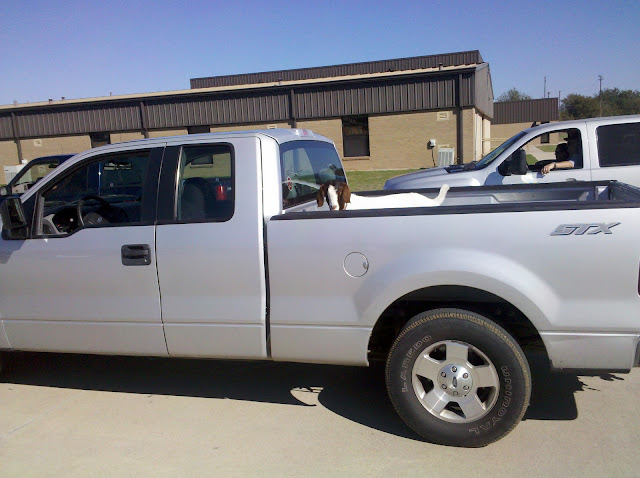 Since that first day of school I have given some thought to the comment made by woman in the office. The majority of the people out here have only lived in small towns. To them, it is all a matter of perspective. They can't understand the convenience of 5 different grocery stores, gas stations, movie theaters, or retail shops in a 2 mile radius of their house. They don't really understand variety or selection. A service man came recently to read the water meter. He told me that his wife wanted to move in to the city but he was happiest in the country. He had grown up in the big city and he never wanted to live there again. When I questioned which city he lived in, he responded Sherman. That "city" as of today has a total of 40,000 people living in it. He was 50ish years old. I can only fathom how many fewer people that "big city" had in his childhood. Like I said, though, it is a matter of perspective.

Once the children were settled in that first day we took off to explore the nearest town of Bonham, Texas. (You have to appreciate a town that feels there is no necessity to make yourself up, in any fashion, in order to go in to it.)  My husband and I used to play a game of going in to Walmart and trying to find someone that looked "normal".  (Normal meaning someone that looked like they might be a transplant, like us.) I know what you are thinking. 1.  That the retail establishment automatically warrants the oddity of people who frequent it. 2. This sounds like a pretentious game. However, that wasn't the intent and people in Bonham just have a different look and sound to them. Women seem to wear a superfluous amount of shiny  rhinestoned accessories and their hair always  poofs in odd places. Men all look like they just climbed off a tractor or finished hunting. . Plus,  this Walmart is the ONLY retail store (other than feed stores, hardware stores, or second hand shops) in the area. It is also the ONLY grocery store in miles and miles. It is an excellent gauge of all of the people that live in the vicinity.

On our first trip in to Walmart we saw this- 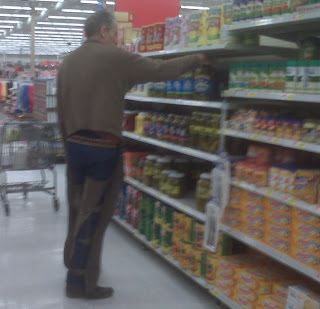 This man, clad in chaps, spurs, and a nice gray cardigan came jingling down the aisle that we were shopping on. (Take note of not only his apparel but also how short the shelving is in this store. Fewer people in an area obviously mandates less choices.) Angry that he couldn't find the extra large jar of pickles that he regularly purchased, he took to berating an employee of the store about how the jar he bought always had the word CRISP printed on it. To this, without emotion, she turned the jar around, displaying the word crisp and proceeded to walk on. My husband, at this point, tells the crispy pickle loving cowperson, "All you need now is an extra large jar of mayonnaise to go with that". (Obviously, a statement that would be amusing to us, because  of  the sheer volume of mayonnaise containers for sale at the store). His response? "I already have one". Thus was our inauguration in to the area.

We have since lost interest in that game for a myriad of reasons. First being, I try to frequent that store as seldom as possible after hearing a mother and her young daughter screaming profanity at one another on aisle after aisle. It actually became so bad that with every, "fuck you" I found myself reciting gibberish to my children in an effort to distract them. It worked, and instead of hearing the oral assault, my daughter's belief that I am insane was solidified. SECOND being, we simply became desensitized to it all and people blurting out, "Mmmm, I hadn't had me no shake-n bake in a long time" didn't seem so odd.

I didn't have a clue that shake-n bake was even still around until I moved out in to the country.