This is our house, as of today: 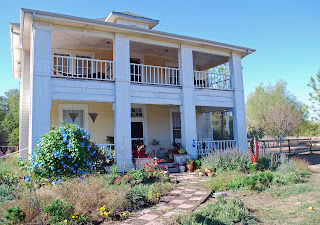 It is over 100 years old and has never been insulated. It has wonderful, old, wavy glass, single pane windows. It has 12 foot ceilings and original wooden floors. What this means is... in the winter it is freezing. In the country, there are no buildings to block the wind. The northern wind blows freely over the fields and through the grasses until it reaches the cracks and crevices of my home. To which, with no obstacles to keep it from coming in, it is allowed to roam unabated in to every living area within. Anyone who has ever come in to contact with me, knows because of my incessant complaining, that I hate cold weather. The first winter, my home, was my personal purgatory.

The men that we had purchased this place from had used it as a weekend house. Their sweet little country get away. Looking back though, it is quite possible that there is a distinct reason that they chose to sell the house after only owning it for a year... and that reason, my assumption would be, was WINTER.

One day, while on the couch of purgatory, I took notice that the furnace had not shut off in a considerable amount of time. Up until then I had ignored the fact that I could not only see my breath, the baby's breath, but also the dog's breath. With a multitude of blankets draped around me I waddled up to the thermostat to gaze in shocked amazement at the reading of 56 degrees. I am conservative in my temperature selection but not THAT conservative. The furnace stood little chance of warming this house up if it was a constant 10+ degrees cooler than what it was set at. My husband and I spent the next 48 hours in insulation mode. We took apart door jams to stuff it in. We bought 10 cans of that yellow foamy stuff and squirted it everywhere. We covered the windows with heavy fabric. We put down thick covering on the floor, under the stairs. Our conversation was limited to, "I feel air coming in here", "where", "right here", "got it". We caulked and covered every spot.

That winter we spent (without an iota of exaggeration) $2900 in utility bills towards heating.


This last year we did something about this: 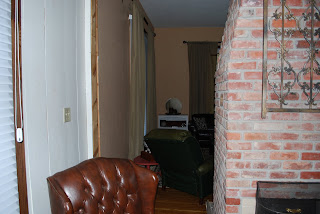 We had two open living areas that we sectioned off. Thought being that I can hold up in the smallest living area with a space heater placed strategically between my legs. Hence, I would never be cold again. It was better... but purgatory was not one to release me from it's icy grasp so easily.

Last year, my oldest son brought the flu home from school. In his usual fashion, he hardly fell victim to it while I was down for weeks. I was certain that death would claim me at any instant and whining that cetainty to anyone within ear shot. Everyone in the family became ill. However, everyone else seemed to recover within 24 hours. Not me. Texas rarely has snow or severe ice. During my infestation of the flu virus... Texas had both. One night, as I lay on the floor of my bedroom, incapable of making it all the way from the bathroom back to the bed, I realized that if I didn't see a doctor I actually, really, would die. OF COURSE, on the day that I finally succumbed to the idea of getting medical help, the roads were completely frozen. Having dealt with the small town doctor previously, I was dead set on driving the 40 minutes to a "real" doctor. (My definition of a real doctor is simply a doctor that is willing to give painkillers.Which, for whatever reason, our town's doctor is not).

Long story short: You can't drive 70mph on ice. So what normally is a 40 minute drive became an hour and a half drive. I crawled in to the office wearing my pajamas and a coat and lay down in the waiting room. After an examination, blood tests, and x-rays, it was determined that I had pneumonia. He gave me injections, syrups, and best of all... painkillers.

Not much later, another ice storm hit Texas.My husband, who is wonderful beyond measure, is a thunder stealer. (Side note: One time when I was having to undergo a minor surgery he decided to fast in solidarity with me. As the nurse struggled to insert the IV, with lack of sustenance in his stomach, he fainted. As if in a ridiculous sitcom, every nurse fell to the floor to help him. I was left laying on the table, alone.) So it is little surprise that as I was still recovering from pneumonia he falls and splits his head open.  As he was letting out our pig, Lola, he rounded the corner and bumped in to her. He slipped on the ice and slammed his head on the concrete. We made the dangerous drive to the town doctor. He received 3 stitches and... no painkillers.

As the air outside starts to take on a chill, I can feel fear starting to set in. I don't know what winter may hold for me this year but I feel certain that I won't be able to escape purgatory any time soon.